Call Us
Email Us

Toyota Canada Inc. is about to begin construction of its new Clarington facility and celebrated by revealing a first look at the new building’s design and announcing the donation of a one-kilometre multi-use recreational trail. 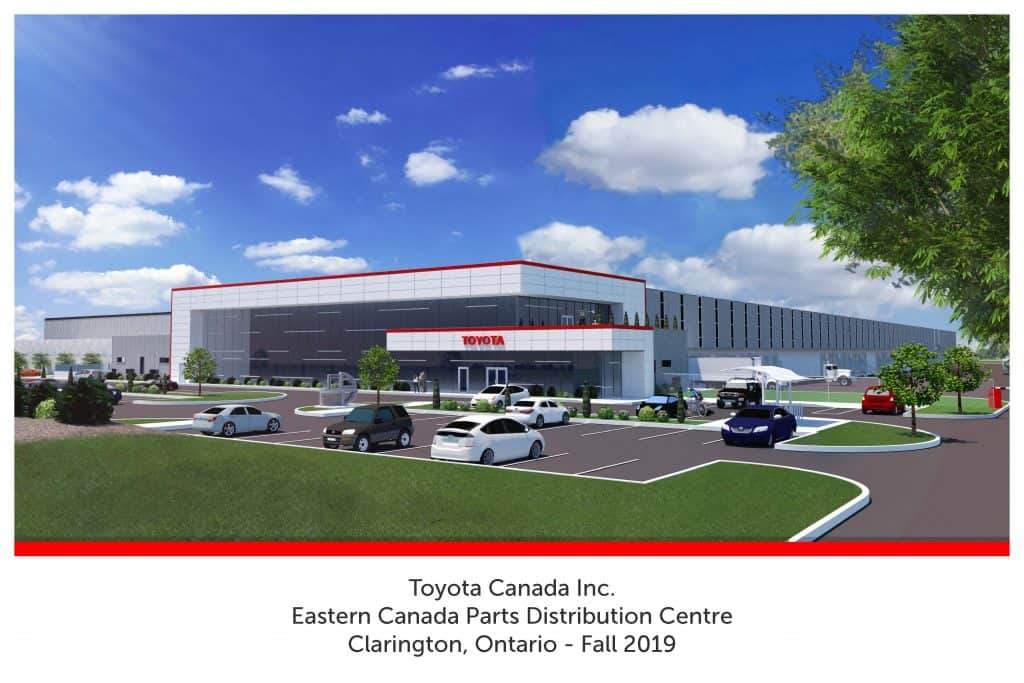 “We’re looking forward to building here,” said Larry Hutchinson, president and CEO of Toyota Canada Inc. “I’m delighted to be here today to give you the first look of what we will be building just around the corner.”

Toyota will break ground this spring on a new 350,000-square-foot Eastern Canada Parts Distribution Centre in Clarington. Toyota will spend $40 million to build the new facility on 12 hectares (30 acres) at 1200 Lambs Rd., near the corner of Baseline Road and Lambs Road in Bowmanville.

“We will see shovels in the ground very soon … This project is ready to go,” said Sheila Hall, executive director of the Clarington Board of Trade. “I know Toyota is very anxious to get moving and we’re all excited to see it move forward as well.”

The new Bowmanville Toyota building will be an environmental leader, helping the company meet its goal to have zero carbon emissions operations by 2050, according to Hutchinson. Toyota plans to open the new facility as a LEED silver certified building (a rating system for green building) and the company is working toward eventually having a zero carbon emission facility in Bowmanville, he added.

“Once we picked Clarington as a site for this new facility, we thought about how we could offer an immediate yet lasting investment in this community,” said Hutchinson. “We’re happy to contribute to the quality of life in this community.”

Toyota Canada has set aside $600,000 to build a one-km trail for the community. The multi-use recreational “Toyota Trail” will connect Toyota’s new facility to the existing Soper Creek Trail system. 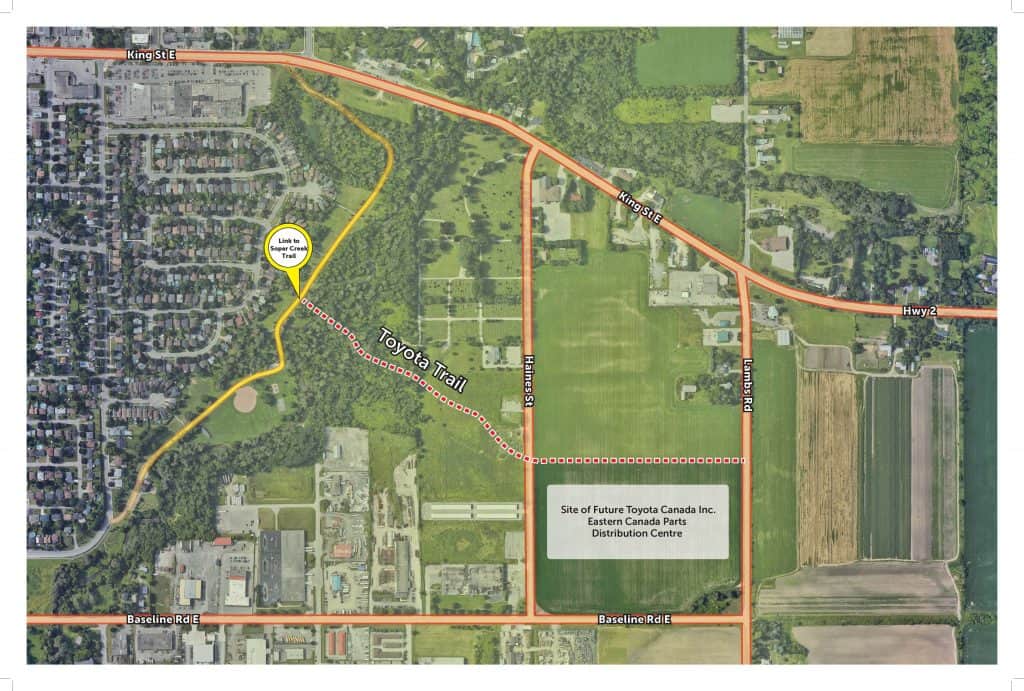 “This was an unsolicited act of generosity on Toyota’s part. We didn’t ask them to do this. They came forward and offered it. We’re thrilled to welcome business to town. They’re coming to town and the very first thing they do is this,” said Clarington Mayor Adrian Foster.

Toyota Operations are set to begin in Clarington in the fall of 2019. The new Eastern Canada facility will service Toyota and Lexus customers and dealerships from Manitoba to Newfoundland.

Since early 2016, the Clarington Board of Trade and municipal staff have been in discussion with Toyota Canada about locating a distributing centre in Durham. In August 2017, Toyota representatives came to Clarington council to request an amendment to the Clarington official plan and zoning bylaw to permit a large floorplate warehouse and distribution centre on Lambs Road. In November 2017, it was officially announced that Toyota is coming to Bowmanville.

“I know they’re all very happy about today’s announcement, partly because we’re going to drastically reduce their commute time into the city. That’s a great thing but the real reason we chose Clarington is because it’s a great place to do business, a great place to invest,” said Tony Kelly, Toyota’s vice president of customer service.

The Toyota facility will have approximately 150 employees when it begins operations. The site also provides plenty of space for future growth, according to the company representatives.

407 Open From Harmony to Taunton

Life-Saving Isotope will be Produced at Darlington Nuclear

Get the latest news & updates from the Clarington Board of Trade

Why Our Members Choose The Clarington Board Of Trade

Corry Hamilton, OwnerTaking The Lead, Bowmanville
Read More
"The CBOT has offered me an opportunity to increase my presence in the community. The wonderful women who run the CBOT have been incredibly helpful and supportive, whenever I've had a question or concern. I love that they offer evening events... Besides all of the extras that the CBOT offers; I've also met a lot of great business owners, who I consider friends. Why wouldn't you want to be part of such a phenomenal group?"
Dale Gibbons, OwnerW.O. Insurance Brokers, Courtice
Read More
“The key reasons that W.O. Insurance Brokers chose to and continues be a member of Clarington Board of Trade is that it provides an opportunity for our team to meet people in the community we work, through a variety of avenues (networking events, educational events) in addition to the solid work they do in promoting local business. There are also many other benefits available depending on your business needs.”
Francine Nesbitt, OwnerSafe & Sound Manufacturing, Bowmanville
Read More
“Amongst the benefits we have accessed through the Board is an excellent Benefit Program for our employees. Besides the very favorable rates for the various Plans, is the representative who helps you plan and make changes to suit your business activities.”
Mike Gazo, OwnerPerfect Party Place, Bowmanville
Read More
“…In today’s competitive marketplace, every business owner not only needs to run their business to their best potential, they also need to become a part of the community. The CBOT is one of many channels to help a business owner achieve that. We are proud to be members and glad to be a part of the Clarington business community.”
Fred & Sandy Archibald, OwnersArchibalds Orchards & Estate Winery, Bowmanville
Read More
“…CBOT has provided great networking opportunities for us to meet the people behind the products in our community. The organization has also offered affordable educational seminars to update business owners on topics & keep things fresh. If you think that you've got things right, you've already lost! The networking & seminars alone make the CBOT Membership Fee a bargain.”
Sandra McBrideBowmanville Veterinary Clinic
Read More
"The Bowmanville Veterinary Clinic has been members of CBOT for many years. The staff at CBOT are friendly and helpful. CBOT provides excellent networking opportunities for businesses. It gives a great sense of community and support for small businesses. Our clinic recently celebrated 40 years in business and was honoured to receive a longevity award at the annual CBOT dinner. It is great that CBOT recognizes these milestones that mean so much to small businesses."
Previous
Next